The older name of this company, is an acronym formed from a Dutch phrase which literally means: "through united co-operation everyone regularly profits". Probably not just by chance, the new name formed by shortening the older name means "save (money)" in Afrikaans, Dutch, Danish, German and Norwegian.The older name in Dutch also means "the fir tree", hence it's logo.What company is being talked about here??
Posted by sinister.ankit at 3:35 PM 5 comments: 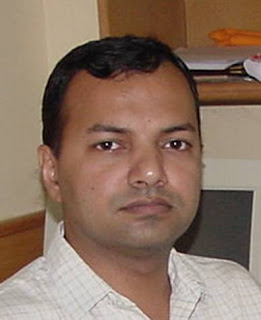 Which prize's first edition was won by this gentleman who is currently a professor in the Department of Computer Science and Engineering at the Indian Institute of Technology (IIT), Kanpur?


Ans:Kamal Rathi,Inquisitive and Sijut were bang on target.It is Manindra agrawal.He is the first to be chosen for the first Infosys Mathematics Prize in association with the National Institute of Advanced Studies in India.
Posted by Eklvya at 4:07 PM 3 comments:

This word was first used during World War II to refer to bombs. This word was Air Force slang to refer to large bombs weighing as much as 8000 pounds. These bombs were so powerful that they were capable of destroying an entire city, hence the term.